The Lenovo ThinkPad range has been trusted by the IT industry since its launch in 1992 and the latest version continues to deliver the expected pedigree. The L14 is the perfect mid-range device capable of managing the everyday business tasks. Its slim design is appealing and shows off your business to prospects when meeting face to face. 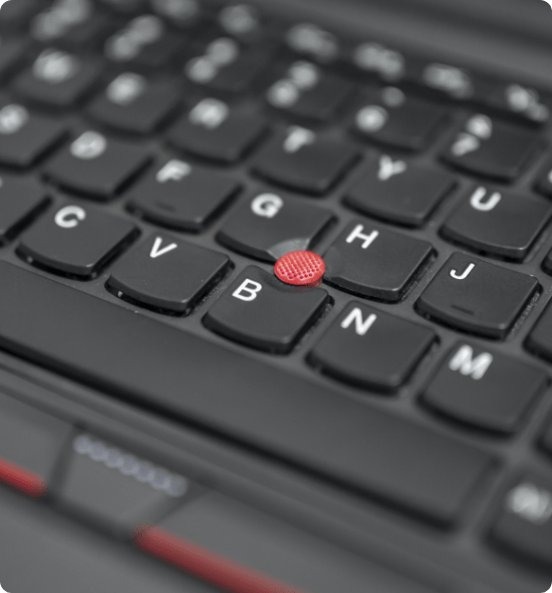 The Lenovo ThinkPad L14 Laptop is nothing short of iconic in design and innovation, quite like opening a box of chocolates there are so many treats to be had on the inside.

The flagship Lenovo laptop is the ThinkPad series and the first of the these were released in 1992.

The biggest and most well-known fact about this is that they have been to outer space and for many years they were the only laptops certified with the International Space Station.

The design of these ThinkPad laptops is highly recognisable with their solid black and boxy (although some newer models are now curved) look based on the Japanese bento box; you need to open them to find the goodies!

Not surprising then that the ‘Father of the ThinkPad’ is a Japanese engineer and product designer Arimasa Naitoh.

These are well known for being solid, high performing computers that are perfect for any business, they feature slim design spill-resistant keyboard, security protected features and they are manufactured to be strong in build.

The ThinkPad L14 is an entry level laptop in comparison to the other ThinkPad models in the range but there is nothing basic about how this laptop functions and performs.

There is no question that if you do video conferencing this laptop performs at a high level. The battery life lasts approximately between eight or ten hours using a mix of media which for a business day is sufficient.

If you are web browsing you will not be disappointed as it is fast and responsive, loading very quickly.

The L14 performs well with Netflix, Amazon Prime video, You Tube and any other external video players. Gaming also performs well and notably does not drop frames so the gaming experience it slick.

When should I replace our old company laptop?

If your laptop is over 3 years old it will most likely cost more to keep it running than replace with a new machine. In our latest eBook we explore the 7 signs when a laptop needs to be replaced, get your free copy here.

Get Your Copy Here

The ThinkPad L14 weighs around 1.6 kilograms and unlike other models it is encased in hard smooth black plastic material.

The screen lays back flat should you need it to with the screen itself being an interactive touch screen giving tons of versatility to the user. Colours display evenly with very stable viewing angles.

The keyboard has large well-spaced keys that have a sturdy tactile feel when typing on them and of course there is a light up background under the keys too.

As with all models of laptop there is a webcam top and central but in addition to this there is a ThinkShutter, this means you can physically close the camera off if you do not need to be using it. Lenovo has given extra thought into the privacy of the user.

If you flip the L14 over, you will see two speakers on the left and right for Dolby audio stereo sound output. Sound on the L14 is exceptionally good in comparison to other laptops on the market, it even manages to separate bass evenly.

The ThinkPad L14 also has a fingerprint scanner entry point for tighter security for the user.

Breaking down the ports on this model is worth mentioning. On one side there is a USB (Gen 1) that is a fully functioning multi service USB being able to take power in and video out. The next port is a USB-C (Gen 2) and does the same as the USB port (power out and video in) but is much faster.

Then there is an ethernet adaptor to use with a Lenovo dongle followed but another USB port. An HDMI port for hooking up external displays then a micro-SD card slot which is great for taking media around with you.

Above that slot is the NANOsim slot to connect to 4G networks so you can plug in on the go without any issues almost an essential for the business traveller or any mobile businessperson on the go. Then there is a full size ethernet jack point.

An unusual but terribly clever slot is placed on the end that is a Smartcard reader, used for scanning bank cards or credit cards and it can even be encrypted so that companies can use their VPN cards in the slot too.

Turning to the other side you will find a USB port and a microphone jack port sitting alongside fan exhaust which is incredibly quiet for a laptop fan plus you can enter this into quiet mode if you do hear it but remember that will have a small impact on battery life.

Speaking of the fan it is worth noting that not only does it perform quietly but it stays cool too thanks to its plastic housing the heat is not passed on too much. At the end is the Kensington jack for security which will lock this laptop down to your desk.

Lenovo have made upgrading remarkably simple with the L14 all you need to do is pop the back panel off and upgrade as you need to. That said the ThinkPad L14 already comes with 250 gigabytes of storage and 8 gigabytes of RAM.

The ThinkPad iconic red dot is now renamed the UltraNav and works as a mouse pointer. The click trackpad now has three built in physical buttons for clicking and these are sturdy and have good pressure points.

What is the difference?

It is fair to say that these two processors provide tight competition between them. It is said that Intel has the faster processor, but AMD (which stands for Advanced Micro Devises) has greater graphical horsepower. So, depending on whether you are in the market for a laptop, for gaming or picture or video editing choose AMD but if you want faster processing choose Intel.

Either way you can expect a high-quality everyday performance from the L14 that carries out simple image and video editing, programming apps or CAD programs that running smoothly whichever you choose.